The Royal Palaces of Abomey: Palace of King Behanzin, Benin 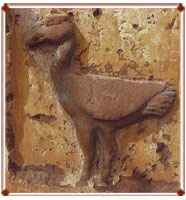 "Constructed in the 17th century by the kings of Dahomey, the Palace of King Behanzin is situated in the Citadel of Abomey and is surrounded by a trench and high clay wall.

Each king ruling the Kingdom of Danxomè built his palace next to his predecessor's, this site representing an important step in the development of this civilization over two centuries and illustrating the historical relations between Europe, Africa and America. War, however, caused the site to be abandoned, and as a result of its being situated in the centre of the town, the site has suffered from natural erosion and land speculation. Water damage has further harmed the buildings, walls and bas-reliefs.

The project includes a restoration phase, which aims to drain the site, construct terrasses and better manage the terrain. The restoration of the walls has been already completed. A second phase will involve the installation of a permanent historical exhibition and archives of the intangible heritage in the ajalala of King Behanzin.

(Extract from the "Preservation of Tangible Cultural Heritage through the UNESCO/Japanese Funds-in-Trust" p.20, 2003)"

Back to:The Japanese Funds-in-trust for the Preservation of World Cultural Heritage