Wall Paintings of the Royal Tomb of Amenhotep III, Egypt 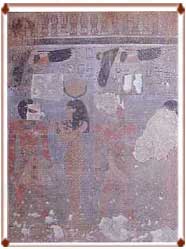 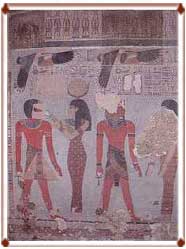 Before and after restoration© UNESCO 2003

"The Royal Tomb of Amenhotep III, situated in the Western Valley of the Kings, is one of the most important tombs at this site, which was registered on the World Heritage List in 1979. The tomb is decorated with wall paintings that are among the most exquisite of those surviving in the royal tombs of the Eighteenth Dynasty. Since its discovery in 1799, the walls and paintings of the tomb have deteriorated, and the structure is now threatened with collapse.

Both the national authorities and international scholars have stressed the importance and urgency of restoring the tomb, and Waseda University (Japan), with the cooperation of UNESCO and the Egyptian Supreme Council of Antiquities, has carried out preliminary cleaning of the walls, consolidation of the plaster and pigment layers, and the training of local conservators to help bring this about. Further scientific analysis is planned, to be monitored and conducted by UNESCO, as well as research on the rock and study of the environment in order to adapt the conservation work to the climate.

The project is the result of collaboration among a multi-disciplinary team of experts."

Extract from "Preservation of Tangible Cultural Heritage through the UNESCO/Japanese Funds-in-Trust" p.21

October 2005 : Publication of a report by UNESCO on the first and the second phase of this project