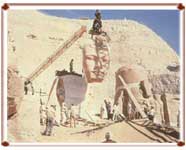 Contribution to the Campaign for the Nubia Museum: US$ 20,000

The International Campaign for the establishment of the Nubia Museum in Aswan and the National Museum of Egyptian Civilization in Cairo was started in 1982, almost twenty years after the beginning of the Nubia Campaign.

The Nubia Museum of Aswan, devoted to house the fantastic items unearthed from the archaeological excavations during the Nubia Campaign, was officially opened on 23 November 1997. It is intended to provide an overall picture of the civilization which had flourished in the area and will thus contribute to a better understanding of humanity and its environment from prehistory to the present day.

(Extract from "Preservation of Cultural Heritage through the UNESCO/Japanese Trust Fund" p.25)