1 July 2004 : The Sacred Sites and Pilgrimage Routes in the Kii Mountain Range inscribed on the World Heritage List of UNESCO 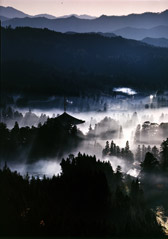 The Sacred Sites and Pilgrimage Routes in the Kii Mountain Range (Wakayama prefecture) were inscribed on the World Heritage List during the 28th Session of the World Heritage Committee, held in Suzhou, China, from 28 june to 7 July 2004.

Located not far from the Pacific Ocean, these three sacred Sites (Yoshino and Omine, Kumano Sanzan, Koyasan) have been one of the major places of pilgrimage since the 11th or 12th century. Not far from Kyoto and Nara, ancient capital cities of Japan, these sites testifiy to the syncretism between Shinto, indigenous religion of Japan, and Buddhism which came from Korea and China.

More information on the Sacred Sites

Back to News archives

Back to World Heritage in Japan