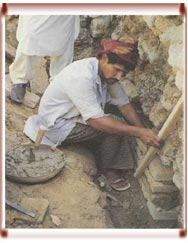 "Moenjodaro, the 4,500-year old city of the Indus civilization, was rediscovered in 1922. The salinity of the soil and periodic flooding by the Indus River are the two major causes of deterioration.

An international safeguarding campaign for the site was launched in 1974 and a second appeal was made in 1983- Since then, large scale measures have been taken to protect the site from the rising groundwater levels and sudden flooding of the Indus River. A UNDP project for national capacity building in cultural heritage was implemented with success.

The immediate objectives of the UNESCO/Japan Trust Fund project were to strengthen the Moenjodaro conservation laboratory in terms of equipment and skills and to develop suitable conservation methods for the ancient brick structures.

The project resulted in the development of scientific conservation methods on the basis of data collected on salts and humidity, such as the protection of the ancient brickwork using mud mortar to form a sacrificial layer in which deterioration can take place."

Extract from the brochure "Preservation of Cultural Heritage through the UNESCO/Japanese Trust Fund", 1998, p.23

The Monuments of Moenjodaro of Pakistan are inscribed on the World Heritage List.