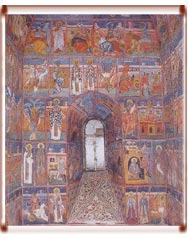 "The Probota Monastery Church of Saint Nicholas was inscribed on the World Heritage List in 1993 as the most representative of the Moldavian painted churches. It has attracted much attention for its exterior frescoes, which are among the oldest surviving such frescoes in northern Moldavia (one of the regions of Romania), and have never been restored.

Between October 1996 and August 2001, UNESCO, with the financial aid of Japan and in collaboration with the Romanian Ministry of Culture and the Archbishop of Suceava and Radauti, carried out extensive restoration work at Probota.

The interior and exterior frescoes and the iconostasis of the Church were painstakingly restored. Removing the successive layers of limewash from the fa çades revealed a complete cycle of mural paintings, and the safeguarding of these paintings is of immense importance for the history of Romanian art.

The Church has been thoroughly reinforced and a heating sys­tem installed. Several unknown monastic buildings were discov­ ered during the archaeological excavations, and the remains of these have been partially reinforced and opened to the public. "

(Extract from "Preservation of Tangible Cultural Heritage through the UNESCO/Japanese Funds-in-Trust" p.24)