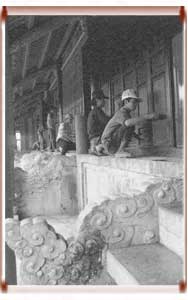 The numerous monuments of Hue constitute the treasured heritage of Vietnam. However, in its recent history the city has suffered severe damage through fire, the tropical climate, vegetation and termite attacks. In spite of the launching of an international safeguarding campaign for Hue in 1981, and the sustained efforts of the Government of Vietnam, the condition of the numerous monuments has continued to deteriorate.

The Japanese Government decided to finance, through its Trust Fund, a project for the restoration of a major monument, the Ngo Mon (the Noon Gate), the main entrance to the Imperial City. Built during the reign of Emperor Gia Long (1802-1820) and completed by Emperor Minh Mang (1820-1841), this monument with a U-shaped structure of brick, stone, wood and bronze, is one of the most outstanding cultural assets in Hue and indeed in Vietnam.

Under the project, an analysis of the causes of deterioration was conducted in order to develop suitable conservation measures. Equipment and materials for conservation work were supplied. Restoration of the Noon Gate, with onsite training of national personnel, was completed in 1993.

(Extract from "Preservation of Cultural Heritage through the UNESCO/Japanese Trust Fund" p.15)