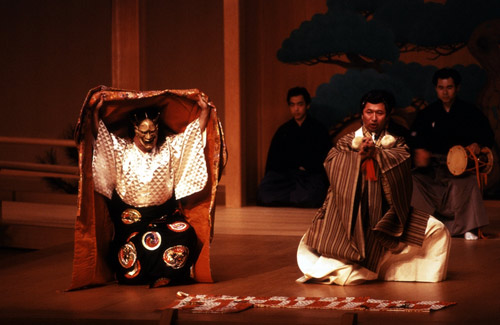 The dual-faceted Nogaku is comprised of two mutually complementary yet multifarious theatrical genres - Noh and Kyogen. Nohgaku has been proclaimed "Masterpiece of the Oral and Intangible Heritage of Humanity " by UNESCO in 2001.

Inspired by historic dramas and tales from traditional literature, the symbolic and aesthetically refined Noh is a dance-based performance marked with reserve and suggestion.

Kyogen, on the other hand, is a spoken comedy which realistically depicts the shortcomings of common people. Both are performed in the same space, with Kyogen being an interlude to Noh performances. This harmonious combination of both symbolism and realism embodies the essence of human nature. 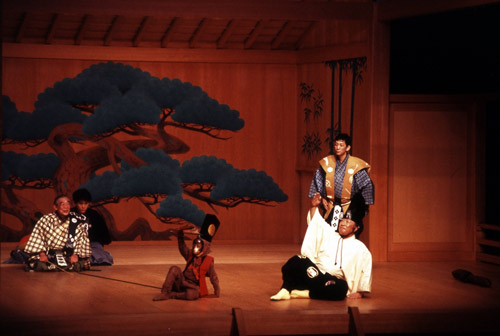 Masks are an integral part of Noh theatre. Though immobile and seemingly expressionless, these fantastic and highly idealized masks seem to come alive as the Noh actor uses them to convey a multitude of emotions. Though more rarely, Kyogen theatre make use of masks primarily to convey surprise or hilarity. 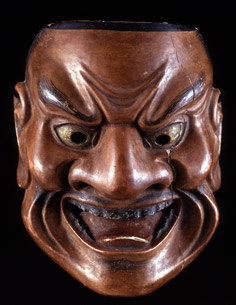 Designated as an "Essential Intangible Cultural Property" in 1957, Nogaku receives legal protection and government grants. A system of video-recording of Nogaku productions is also planned within the framework of the Proclamation Programme . However, a marked decline in the interest of younger generations in this form of theatre can be considered as a possible threat hanging over the future of Nogaku.

More about Noh on the Japan Arts Council 's website , and on the virtual museum of Web Japan