The Secret of Sharing in Bunraku Theatre: the puppets's inner life, the Shamisen, the Tayu.

The Bunraku puppet must first and foremost be animated by an inner life.

The Bunraku puppet is nothing more than head and limbs. The "torso" underneath the kimono is merely a wooden frame. The space in which the puppet's heart would normally be found is a void reserved for the left hand of the main puppeteer. This same hand holds the head in place and controls the puppet's eyes, eyebrows and mouth. The puppet is therefore activated from within. The puppet does not perform by simply miming a series of gestures; it must first and foremost be animated by an inner life of its own. Bunraku is unique among other theatrical forms in that it does not attempt to express life, but rather to capture or embody it and to make the puppets come to life. Consequently, the tayu (narrator) does not just recite the lines as a substitute for the silent puppet, nor does the shamisen (three-stringed spike lute) simply accompany the singing and narration.

It all begins with the shamisen.

It all begins with the shamisen who unleashes the Bunraku theatrical universe with a few plucks of his pick. Sometimes melodic and lilting, and sometimes rhythmic and surprising, the music of the shamisen triggers all the movements and leitmotifs featured in the performance. By its very nature, Bunraku is a theatrical genre meant to be listened to rather than watched. We are first drawn into the plot by the stirring sounds of the shamisen. Listening to this three-string instrument - the heaviest of all lutes - the soul is deeply stirred in anticipation of the drama's unfolding. The listener must therefore fully immerse himself in the shamisen's music and let himself be transported by this peculiar energy that reveals destiny's tragedy as it calls forth all the components of the tale.

The Tayu, both singer and narrator.

Even though the dramatic pace is meticulously set by the shamisen, the plot cannot acquire its human character by music alone. The performance only comes to life once the human voices succeed in rising above the evocative music of the shamisen to interpret and take possession of the impending tragedy. Both a singer and a narrator, the tayu, like a prism, contributes a wide range of voices, emotions and characters to the dramatic flow set in motion by the music. One of the roles of the tayu is to analyze and interpret the action. Listening to his tale, we sense each character and feel what he or she feels, desires, and can expect (even more clearly than the character himself). Using only his voice, the tayu endows the puppet with its own essence. For the tayu, the difficulty resides not so much in knowing how to create the various voices but rather in being capable of delving deep in search of the source from which each "being" emerges with its distinct personality and fate. Over the course of his ten-year training, the tayu must develop not only an appealing voice but also one that is deep, dark and frequently modulating. In the process, the tayu sometimes "forgets" his own voice. The voice of the tayu must necessarily rise from the stomach and from the gut as well. Through the tayu's voice, each life, each soul, begins to adopt its own unique character, and it is precisely the unfolding of the drama that we must listen to with great attention.

Only at this point do the puppets come into play. They bring an additional visual cue to the slightest gesture or emotion. Thanks to the puppeteers (one could almost call them actors) moving in synchrony with the momentum set by the extraordinary voice of the tayu, the puppets come alive from within to experience the most intense moment of their existence. The on-stage presence of the puppeteers (with or without hoods) does not distract the spectators in the least because, unlike audiences of live theatre, they are not watching characters in the process of acting; rather, they are observing inanimate puppets suddenly spring to life to embody a particular emotional state and to fulfill their destiny. The puppets are not the starting point but the culmination of life's dramatic flow. Moreover, t he puppet's sublime interpretation surpasses human acting capabilities. Through the slightest movement of the fingers, the fluttering of eyelids or the arching of eyebrows, we feel a genuine life force coming to the surface. At emotionally charged moments, we sometimes notice the blood rising in the puppet's flushed cheeks - such is the miracle of Bunraku!

An immense wave of dramatic tension fills the entire theatre 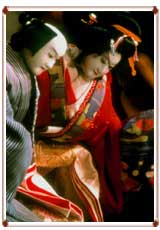 Triggered by the shamisen and sustained by the voice of the tayu, an immense wave of dramatic tension fills the entire theatre and is transformed by the refined and meticulous art of the puppets - and therein lies the secret of Bunraku theatre. The sometimes-tragic life of man finds its ultimate expression through the puppets who so closely resemble human beings. Both joy and suffering come to an aesthetic and literal climax, through which the audience experiences a catharsis and possibly a sort of redemption for the tormented souls invoked on stage.

Completely absorbed in the music of the shamisen and the mysterious voice of the tayu, we, the audience - like the puppets - share that life and that destiny. It is not by chance that the shamisen and the tayu do not perform directly on the stage but on a platform projecting into the audience with the puppets on one side and the audience on the other. Like the puppets, the audience "receives" life, emotion and fate. This sharing of humankind's destiny is undoubtedly the ultimate goal of theatre. The tragic fate of each human being flows in a stream together with those of his fellow men. Human life is like a journey composed of episodes of love and the cruel necessities of fate. Such is the underlying philosophy of Bunraku drama.

Manzai, The Celebration of the Four Seasons

The Secret of Sharing in Bunraku Theatre, the puppets's inner life, the Shamisen, the Tayu

Back to Focus' Main Page